Richard Kendall is celebrating 50 years in the estate agency business. 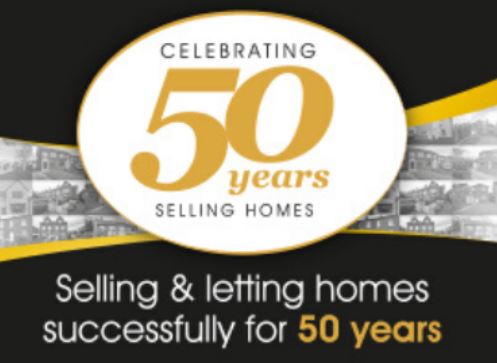 After half a century working in estate agency and growing his eponymous company to six branches, Richard Kendall has no need of a sat nav to guide him round his “manor”. He knows the Wakefield, Normanton, Pontefract and Castleford areas like the back of his hand.

He’s also well aware of the nuances that an outsider would never spot.

While all the places on his patch have a strong sense of community in common, there are subtle differences.

“They all have slightly different accents and personalities, and I can pinpoint them all. For instance, people in Normanton and Castleford like to come into the office and have a good chat, whereas Wakefield people are more business-like, more factual.”

He adds that many of those who grow up there choose to remain.

“It’s said that 97 per cent of people who buy in Crofton were born there. Ossett people like to stay in Ossett and so on. They are the sort of places where your mum still lives round the corner and there’s a lot to be said for that,” says Richard, who has always lived in Wakefield.

Uniting them all is a pragmatic approach to Brexit uncertainty that has plagued property markets elsewhere.

“Brexit hasn’t really affected us. People here have just carried on moving,” says Richard, who conforms to the local stereotype.

He has kept calm and carried on through difficult times, including numerous recessions.

“The last recession was the worst because it was so long and we had to lose staff,” he says.

“The recession in 1972 was hard but then we had a property boom in 1974 when house prices shot up by 20 per cent. I came to do the newspaper adverts one week and it was the first time in my life that everything on the books had been sold.”

Whether times are good or bad, those selling or buying a home require help and guidance, which is why he believes that the cut-price online agents will never completely replace traditional estate agency offices.

“If they do we’ll be the last offices standing. People want the sort of service and local knowledge we can offer and they want to be able to come in and talk. They also want someone who can push a deal through,” says Richard, who began his career in 1969 at the age of 22 when he got a job as a trainee property sales negotiator.

“Back then I had a two-bedroom semi and my mortgage was £23 a month,” he says.

By 1980, he was manager of the residential agency department.

After a move to help the TSB establish a flagship home centre in Bradford, the early 90s recession hit and the bank pulled out of estate agency.

“At that point I was redundant and almost bought Goathland Post Office in Heartbeat country. My life could have been very different but then I was offered the chance to buy an agency for £1,000 with 23 properties that had been on the books for ages, including the owner’s own home.”

“I actually got cold feet at the last minute because of the recession. I called my solicitor but he had exchanged contracts. He said: ‘Sorry pal, it’s yours.” I had to get on with it.

“By the end of the week I took two full page adverts in the Wakefield Express and within six weeks I’d sold the house of the man I bought the business from.”

The rest, as they say, is history and his one-man band operation flourished. There are now six Richard Kendall branches: Wakefield, Ossett, Horbury, Normanton, Pontefract and Castleford. They employ 78 people.

Emotional intelligence and embracing change has been key to his success. Full of anecdotes and personable as well as professional, he spotted what customers needed.

He introduced mortgage services and was also the first agent in England to use a digital camera, which he bought at a realtors conference in America.

The lettings side of the company was launched after the third person to ask Richard if he did rentals was greeted with the reply “yes, we do.”

As panic set in and he confided to his wife, Jennifer, that he didn’t have anyone to do the job, she told him “you do now”.

After turning their spare bedroom into a lettings office, she soon graduated to an office in Horbury.

Since Jennifer’s retirement, the lettings arm is now overseen by the couple’s son, Simon, a former chef, who is also a valuer and director of the business. The skills he learned in commercial kitchens – patience, attention to detail and multi-tasking – have helped him build on his mother’s success.

His sister, Claire Kendall, a chartered surveyor who had a high-flying career in London before heading back to Yorkshire, is also a partner in the family business.

“Dad had been asking me to work with him ever since I did my A’ levels but I was set on London.

“I was there seven years and was able to bring the experience here,” says Claire, who has modernised the IT system and the website while adhering to Richard’s mantra “do things properly, do things right.”

“I’m not really technical and so I don’t think the business would’ve worked without Claire and Simon these last 10 years,” says Richard, 72, who has no intention of retiring.

“My strength is valuing houses and talking to customers. I work part-time though, I don’t come in on Fridays,” he quips.

“He still steers the ship. Work comes first for Dad. His motto is if you look after work you can look after your family,” says Simon.